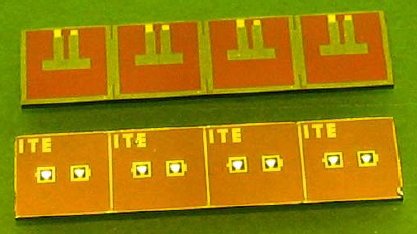 Ion Sensitive Field Effect Transistor(ISFET) sensors, developed and fabricated at ITE, were originated from the MOSFET structure, in which instead of a metal gate a bare layer of a modified dielectric gate exists. The standard NMOS or P-well NMOS technology was implemented to form a family of ISFET sensors with different electrodes configuration, performance, and application possibilities.

ISFET sensor properties and performances are mainly applied for pH measurements. They may be also used as a base structure for a Chemical Field Effect Transistor (ChemFET) obtained by deposition on the dielectric gate area a polyHEMA layer followed by siloprene-based ion-sensitive membranes. With these modifications the ChemFETs may be used for monitoring of ground water pollution. Several other applications are possible including biomedical and biochemical areas.